Voltage conveys the ability to do the work of moving charge from one point to another. A 5 V battery, for example, can do 5 joules of work per coulomb of charge. When current is flowing through a resistor, we can measure the amount of work (per unit charge) required to keep the current flowing through the resistor.

This is the essence of voltage drop: a battery (or voltage source) supplies energy for doing the work of moving charge. When current is flowing, components such as resistors consume energy, and the amount of work per unit charge associated with the current flowing through a given component is the component’s voltage drop.

We can intuitively recognize that driving a given amount of current through more resistance will require more work. Thus, if two resistors are in series (meaning that they have the same current flow), the resistor with more resistance has a larger voltage drop. This is the basis for the operation of the voltage divider circuit. 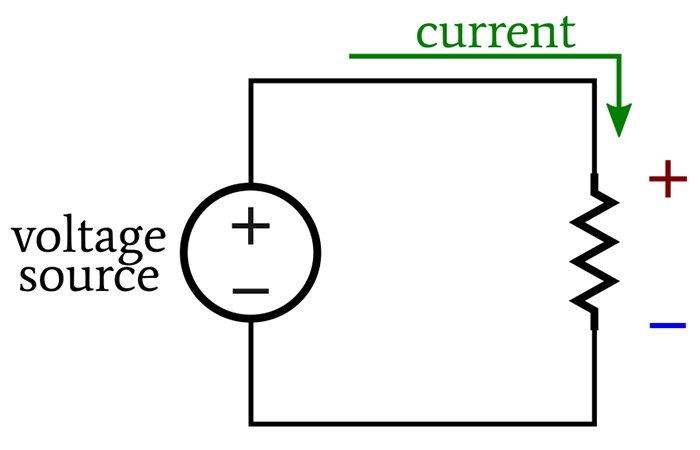 A current flow model depicting how a voltage drop is positive where current enters a resistor and negative where it exits.

Capacitors and inductors store energy, and consequently, they can function as either a load or a source. When they are acting as loads, they have the same voltage-drop polarity as a resistor.

When acting as loads, capacitors and inductors have the same voltage-drop polarity as a resistor.

The voltage-drop polarity of a capacitor doesn’t change when it begins to discharge. Even though it is acting as a source, it produces current whose direction is opposite to that of the charging current.

However, when an inductor discharges, it attempts to maintain current flow. Thus, the polarity of the inductor’s voltage drop changes, because it is generating current whose direction is the same as that of the charging current produced by the source.